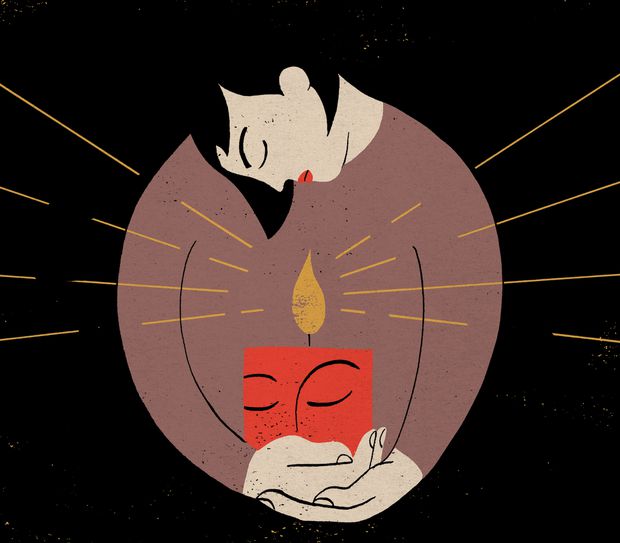 It occurred to me, as I sat holding my mother’s thin hand in the intensive care unit, that none of her stories had been about dying. My mother was celebrated in our family for her stories, many of which sprang from her years as a nurse in a large Catholic hospital. The things she’d seen! The objects lodged where no objects should be. Wrong limbs operated on. The hospital priest much loved by student nurses because he was handsome and could say mass in 10 minutes.

Her patients loved her because she had an unending supply of goodwill, which hid her own sorrows. The stories she brought home from the hospital were hilarious and vivid and grotesque, but they always ended on a high note. The lady and her monkey left the emergency room in harmony. The baby survived.

Dying was one thing she didn’t talk about: Not her own death, and not the ones she’d witnessed. Except once, when she’d told me about a dying patient whose face became suffused with radiance at the very end. When my mother was dying, I kept waiting for that moment, but it never came. She laboured for breath and pulled at her oxygen mask so that she could whisper to me that she was afraid. I know you are, I said.

But there was so much else that was radiant. She trusted me with her fear; it was a gift. The nurses who moved her fragile body with such tenderness, they were a gift. The cleaners who mopped her floor quietly and smiled at her. The junior doctor who took us into a room and shut the door so that we could cry in private when all the options had run out. These days we argue about medically assisted dying, but what can’t be known, until you’re actually there, is how much life there is in death. As the palliative care doctor Rachel Clarke writes in her book Dear Life, “All that is good in human nature – courage, compassion, our capacity to love – is here in its most distilled form.”

And humour, too, if like my family you bend toward the macabre. Christie Blatchford, the great journalist who died this week, was planning to write something funny about the end point; I wish she had, because black comedy is everywhere. Pneumonia had almost robbed my mother of her voice, so the hospital gave us a sheet printed with helpful pictures a patient could point at. There were squares indicating food and TV and even a grinning face that said “happy,” which I don’t think got used very much. “Music” sat right above “let me go.” What if you were asking for a song and your finger slipped?

We wrote the alphabet on a sheet of paper and my mother picked out letters. “She’s not really spelling out ‘wine,’ is she?” my sister asked. But she was, so we smuggled wine in a little plastic bottle that looked like a specimen jar – Mildred, who accidentally once brought home tonsils in just such a jar, would have appreciated it – and dipped in a sponge to swab her mouth with pinot grigio. I made my siblings promise to do the same for me when my time came.

What can we promise each other, at the end? That we’ll be there, through all the boring, painful, transcendent moments. You’ll fall asleep in uncomfortable chairs and drink terrible cafeteria coffee so that if your person wakes up suddenly, panicked and confused, you will be there to take their hand and remind them that they’re loved. You’ll play Luciano Pavarotti through your crappy phone and it will sound good enough. You’ll remember the times you travelled and argued and danced, and laugh about dropping the turkey when it came out of the oven. You’ll apologize for all the times you didn’t call. One of you will talk and one of you will listen, because hearing is said to be the last thing to go.

I understand why people don’t like hospitals, won’t visit hospices, worry about what to say to the dying. We push death to the margins of life so we don’t have to think about it knocking at our own window. The crazy thing is that, if you’re lucky enough to end up at home or in a facility that treats patients humanely, being with the dying actually reminds you of what you love about life. Time folds in on itself, leaving space to think deeply. You become grateful for lungs that still work, and the frozen moon when you leave the hospital in the middle of the night. You remember how much you actually enjoy your family, as they show up with snacks and socks and random useless things, and talk and laugh and reminisce so loudly that a nurse comes and says “shhh” and ostentatiously shuts the door.

Everybody knows what an honour it is to be present at a birth, but what a privilege it is as well to be there at the end, to ease someone’s passing. Of course it’s also terrible, the stabbing beginning of grief, but that pain can be offset with the knowledge that a valuable service has been performed. A service we’ll all need, one day.

We watched our mother’s failing body that had brought four humans into the world, had nursed countless others, had told thousands of stories, had worn red lipstick, had wrung all the juice out of life. We told her we loved her. And then we let her go.

One thought on “Don’t fear the reaper, or the dying”